The most comprehensive collection of Applied Kinesiology published research

“YOU are now responsible for AK’s future…guard it well!”
Applied Kinesiology Manual Muscle Testing has enhanced clinical decision-making for several generations of clinicians who are using the MMT. This has led to better patient care through the detection of change or lack of change in the patient’s muscular performance after treatment. The worldwide emphasis on the inclusion of physical and manipulative restorative procedures as a regular component of healthcare and the attention paid to defining and measuring the health status of large population groups will increase our dependence upon this kind of non-invasive, reliable, and valid test procedure.

Our days as “unconventional” clinicians using the MMT are drawing to a close…but it will be up to you and me to prove to others the value of what we do and to take the lead in “The Muscle Weakness Revolution” that is now occurring throughout the scientific literature and in the healing arts.

...Offering evidence that applied kinesiology's methods deserve to be part of the STANDARD, ORTHODOX DIAGNOSTIC METHODS TAUGHT IN THE CHIROPRACTIC, MANUAL MEDICAL, MANUAL THERAPY COLLEGES AROUND THE WORLD!!
“The body heals itself in a sure, sensible, practical, reasonable, and observable manner. ‘The Healer Within’ can be approached from without. The opportunity to use the body as an instrument of laboratory analysis is unparalleled in modern therapy; if one approaches the problem correctly, making the proper and adequate diagnosis and treatment, the response is satisfactory to both the doctor and to the patient. Applied Kinesiology is something that can be performed with knowledge, with physiological facts, and with predictable certainty. It should be done, it can be done.” – 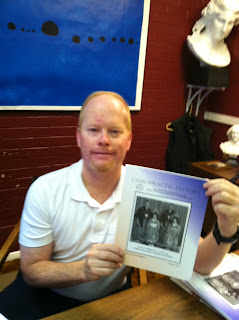 Posted by Dr. Scott Cuthbert at 4:36 PM No comments:

So You'd Like to Become The Best Cranio-Sacral Clinician Possible?

Posted by Dr. Scott Cuthbert at 7:33 AM No comments:

So You Would Like To Incorporate Psychological Diagnosis Into Chiropractic Practice

Applied Kinesiology and Touch for Health 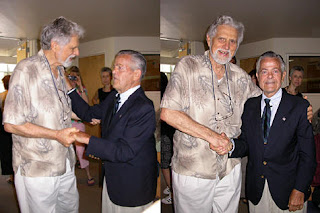 Dr. Goodheart honored his former student Dr. Thie (left)
at the last Touch for Health seminar (2005)
that Dr. Thie could attend before his untimely passing.
(the 30th anniversary of Touch for Health’s founding)
Dr. Thie was the first Chairman of the ICAKUSA

Drs. Goodheart and Thie lecturing (to chiropractors only) in 1975

﻿
Wedding Applied Kinesiology with his own populist sentiments, in 1970 Dr. John Thie (the first chairman of the ICAKUSA) wanted the first-aid, reflex balancing and self-help elements of applied kinesiology to be available for the general public, while Dr. Goodheart wanted to continue teaching and developing Applied Kinesiology for professionals licensed to diagnose and treat patients. Dr. Thie realized that AK could be taught as a method of self-care for all people. Dr. Goodheart challenged Dr. Thie to write a textbook on AK for the public. This policy of teaching full-scope applied kinesiology only to physicians, and the various lay-systems derived from applied kinesiology operating in parallel in their respective fields, remains to this day.
Dr. Thie’s books on Touch for Health (the reflex and self-help methods of AK) have sold in excess of 500,000 copies. “No chiropractor has ever developed a patient education program that has had the influence that Touch for Health has.” (McDowall, 2005) Touch for Health caught the attention of many laymen and other health professionals in several disciplines, and spawned national and international workshops and certification programs. It has spread some of the AK methods (particularly the TCM, reflex, and emotional methodologies) to “hundreds of thousands, if not millions of people around the globe.” (Keating, 2005)

“John Thie’s vision was to develop a lay person support group [for Applied Kinesiology]like other professions had done (American Diabetes Association, American Cancer Association, Arthritis Foundation, and so on) with the ICAK doctors providing leadership and guidance about natural health methods and the lay part of the group supporting these efforts and spreading the word to other lay people and potential patients as other professions have so successfully done.” (Schmitt, 2010)
"John Thie had the most efficient AK office in the world. Touch for Health had developed out of his desire to make AK skills more efficient.  He saw the reflex balancing of AK simple enough to educate his massage therapists into Kinesiotherapists.  He would have 3-4 of them at a time in his large adjusting room doing the basic muscle balance on the patients and informing him of the muscles that wouldn’t balance.  He would then do his work and complete the treatment.  At the same time the chairs around the 7-8 adjusting tables would be full of patients waiting their turn.  He would schedule a group of 10 patients every 30 minutes to arrive at the same time.  They had the choice of watching each other getting their adjustment and balance or waiting for him in his private office.  He catered to all needs.” (McDowall, 2005)
The importance of Traditional Chinese Medicine has been shown to countless people in the West using the Touch for Health methods (based on the bridge provided by the manual muscle test and the early AK reflex diagnostic and treatment techniques of Goodheart).
The contributions and new principles relating to AK and TCM have also been used as a springboard for other techniques and systems including Scott Walker’s Neuro-Emotional Technique, (2012) John Diamond’s Behavioral Kinesiology, (2012, 1979) Roger Callahan’s Thought Field Therapy, (2012) Gary Craig’s Emotional Freedom Techniques, (2012) and Fred Gallo and Harry Vincenzi’s Energy Tapping, (2008) among many others now established in the field of C.A.M.
These developments and mutual influences are extensively covered in
Two New Applied Kinesiology textbooks
that should be of interest to anyone who uses manual muscle testing for diagnostic information including Touch for Health practitioners,
as well as  naturopaths, osteopaths, physiotherapists, sports rehabilitation, meridian therapists, acupuncture physicians,
and massage therapists everywhere.

Touch for Health practitioners particularly will find these textbooks welcome additions to their libraries, bringing the evidence-base for their practices up-to-the-minute in the 21st century!! A thorough understanding of the material in these texts will enable the Touch for Health practitioner to more effectively handle clients and get to the basic underlying cause of a health condition. Most importantly, in the era of Evidence-Informed-Practice, possessing this information will enable you to protect the methods Dr. Thie left you to anyone, anywhere, anytime. 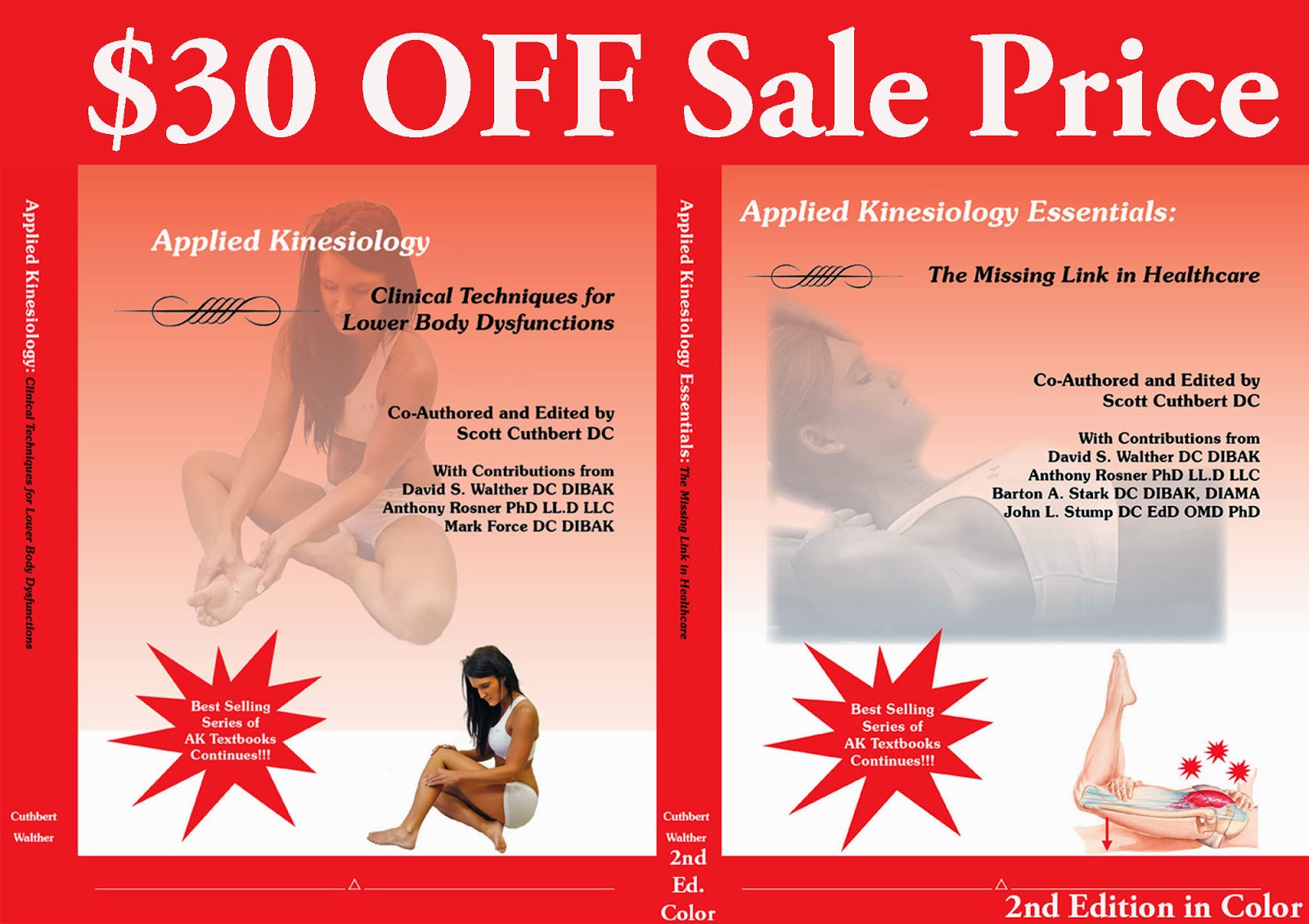 2nd Editions are now available IN COLOR
AND $30 OFF:

Posted by Dr. Scott Cuthbert at 6:40 PM No comments:

Welcome to my Blog

This webpage will have frequent updates about my life and writing, particularly related to functional health care and applied kinesiology. New research in the field of applied kinesiology, manual muscle testing, and somato-visceral-autonomic interactions will be featured.

Visit me when you can!